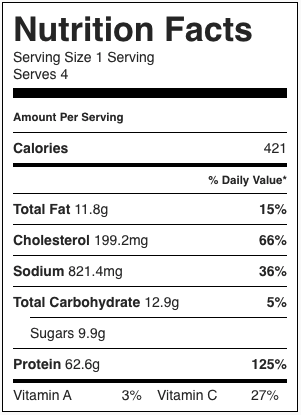 Variation: This recipe can be done from start to finish on the grill if you don't want to heat up the kitchen.

Cut the orange in half. Cut one half into 4 segments and juice the other half. Set the segments aside. Mix the juice with the syrup and vinegar and set aside.

Heat the canola oil in an oven proof skillet (eg cast iron) until shimmering. Season the chicken with salt and pepper and add to the skillet, skin side down. Cook over moderate heat until skin is browned (about 5-7 minutes). Flip the chicken, squeeze orange segments so the juice goes over the chicken, then add the segments to the skillet. Roast in the oven until a meat thermometer reads 165F (74C) (about 7-10 minutes).

Return the skillet to stove top and discard the orange segments.  Pour the syrup mixture into the skillet; bring to a boil.

Turn the chicken skin side down again to coat that side with the syrup glaze; cook for about 30 seconds. Put the chicken, skin side up, on a plate and keep it warm.

Add the chicken broth to the skillet and boil until the sauce is reduced by 1/3, scraping up any brown bits on the bottom of the skillet. Stir in mustard and season with salt and pepper. Spoon the sauce over top of the chicken and serve over a dark green leafy vegetable such as braised spinach or kale.