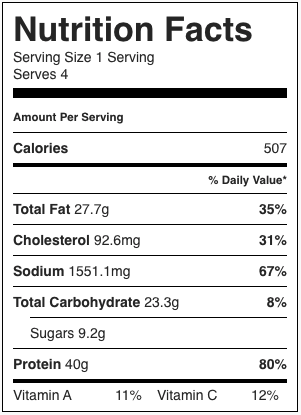 In a skillet, cook bacon until crisp. Remove bacon from skillet and drain on paper towels. Remove all the bacon fat from the skillet.

Pour ½ cup barbecue sauce onto each pizza crust. Top with each crust with chicken, onion, bacon, red pepper strips and cheese.  Bake for 10 minutes, or until crust is crisp. Broil for 3-5 minutes until cheese is bubbly. Remove from oven and cut each pizza into 8 slices.

For individual pizzas, use 4 naan breads instead of 2 pizza crusts.